Spoleto seems to owe its name (which is , however, still not certain) to the conjunction of the Greek words ” SPAO ” and ” Lithos ” meaning broken rock. This is referring to the hill S. Elijah on which the city was built which is what that remains of a landslide from the nearby mountain called Monteluco.

Spoleto is an ancient settlement residing in prehistoric times. It would take too long to tell the full history of Spoleto, but among other things it was capital of one of the greatest Lombard Duchies projecting the city’s political influence over the vast area of central- southern Italy.

La Rocca Albornoz
Surely it is the most impressive fortress in Umbria and is perhaps the most representative monument of Spoleto. It stands on the hill of S. Elijah on a very picturesque landscape : steep cliffs, the oaks forest of Monteluco ,and the extraordinary Ponte delle Torri (late thirteenth century). The initial building began in 1359 by the architect Matteo Gattaponi. The fortress was commissioned by the church to control the Via Flaminia (Roman road) which passes below. The building was built to strengthen and protect the land of the Church, entrusted in 1353 by Pope Innocent VI to Cardinal Albornoz . For several centuries the building was the scene of the most important events in the city hosting important people of that time. Gomez Albornoz , the first lord of the fortress , had Boniface IX in 1392 as a guest there. The nineteen tear old Lucrezia Borgia was sent to live at the Rocca by her father, Pope Alexander VI to get her away from her husband Alfonso of Aragon. After a long restoration, the Rocca Albornoz now houses the National Museum of the Duchy. In the multipurpose rooms one can see temporary exhibits or go to conventions or hear concerts. The courtyard of Arms is an outdoor theater capable of holding1200 spectators. Part of the Rocca is also the headquarters of an European Book Restoration School .

The Tower Bridge – Il Ponte delle Torri
ll Ponte delle Torre was constructed in various phases. It is believed to be a Roman- Lombard aqueduct. But some believe it was built in the Late Medival times. It is 230 m long and is considered the symbol of the city of Spoleto. It is unique in its height of 82 m, which makes it the highest of the oldest bridges in masonry in Europe. The Tower Bridge is considered a rarity as it is one of the few works built in that time for civil use of such grandeur .

Il Duomo di Spoleto
The Cathedral of Spoleto The Cathedral of Spoleto is dedicated to St. Mary of the Assumption. It was built in Romanesque style in the twelfth century and it has undergone subsequent modifications. These include the addition of a porch in the Renaissance style between 1491 and 1504 and the remodeling of the interior in the seventeenth century. The interior has a nave and two aisles on pillars and contains many works of great artistic value. In the first chapel on the right is a fresco of the Virgin Mary and Saints by Pinturicchio. Above the entrance there is a bronze bust of Pope Urban VIII by Bernini. In the right transept one finds the tomb of the painter Filippo Lippi. This same renaissance painter is the author of the important cycle of frescoes in the apse illustrating the nativity , the annunciation, the assumption and the coronation of the Virgin Mary . 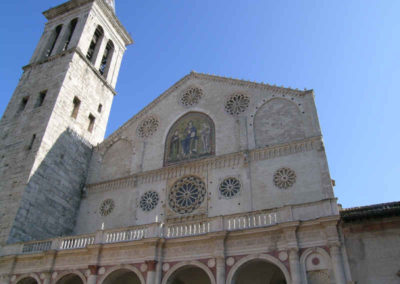 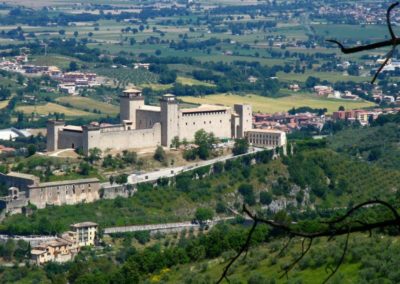 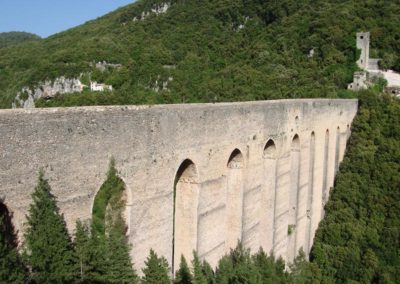